This is the ninth entry in blog series on using Java Cryptography securely. We started off by looking at the basics of Java Cryptography Architecture, assembling one crypto primitive after other in posts on Cryptographically Secure Random Number Generator, symmetric & asymmetric encryption/decryption & hashes. In the meantime, we had to catchup with cryptographic update in latest versions of Java. Having looked at some of the most common symmetric cryptography based applications a.k.a. Message Authentication Codes and Password Storage, let’s take a slight diversion and look at asymmetric cryptography applications starting with Digital Signatures in this post.

Overview: What Is a Digital Signature

Digital Signatures are asymmetric key based operation, in which private key is used to digitally sign a message and corresponding public key is used to verify the signature. Message Authentication Code as well as Digital Signatures both are used for signing messages. MACs are generated and verified by a shared symmetric key, in contrast digital signature is generated by PrivateKey generated by Asymmetric Encryption (public key cryptography) and verified only by the corresponding PublicKey. This private key would be possessed only by the signing authority. Thus, Digital Signatures provide non-repudiation service which MAC can't.

HowTo: How Does It Work?

Similar to Message Authentication Codes (MAC), core concept of digital signature revolves around, computing signature on the sender side using PrivateKey applied on hash of the message(M), sending original message and computed signature to receiver. Receiver verifies the signature using PublicKey. If signatures match, non- repudiation, authenticity and integrity of message from intended sender has been verified.

HowTo: Construction of a Digital Signature 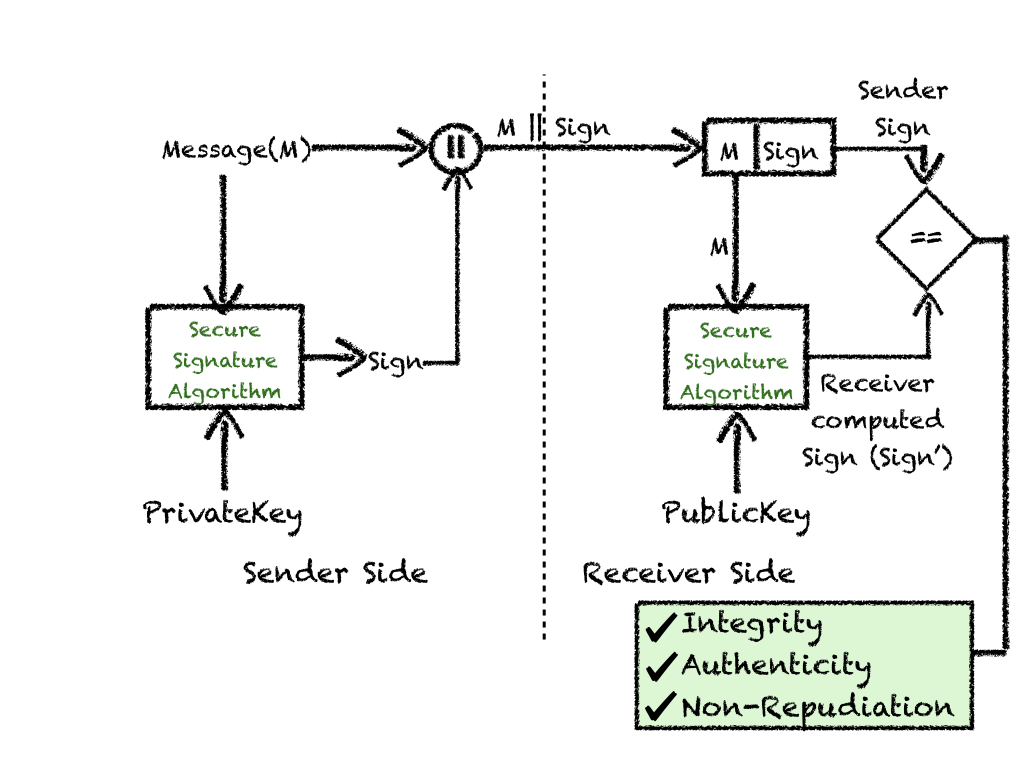 Before we dive into full-fledged implementation discussions, we need to make a few design decisions:

RSA has been de-facto algorithm being used in Digital Signature. However, over time it has been proved fragile[9]. DSA is on its path of deprecation[4] in favor of ECDSA. By steering clear of these two Signature algorithms, we would eliminate more than 50% of Signature algorithms supported by JCA.

As we were discussing in our Java Crypto Catch-up post, later Java versions provide us with very mature Elliptic Curve (ECC) support, we should be embracing those schemes. If you want to learn more about how ECC works and compares against other public key generation mechanisms, I have listed some links in references section below.

Over time there are many curves floating around, not all are good for cryptographic purposes. You should pick between:

If at all[11], you have to abide by government standards, go for ECDSA with an approved curve providing at least 128 bits of security strength. But how to choose a secure curve from 25 options provided through ECGenParameterSpec transparent specification? Below are some of secure parameter spec you should choose[3][5][8] from:

Choose Edward Curves as Signature Algorithm. If you have to abide by NIST standards, choose a curve providing at least 128 bits of security strength.

Signature schemes underneath typically generate a cryptographic hash of the original message and then apply signing algorithm on this hash. Depending on which type of curve you decide on using:

Good news is the hashing algorithm is decided by the scheme[6] :). You don’t have to do anything extra.

You have to choose an underlying hash providing at least 112 bit of security strength. Below are all safe hashing choices:

Note: For ECDSA, make sure you pick a scheme that has a hashing algorithm specified. NONEwithECDSA is not a safe option. Also, don’t pick any ambiguous names like simply ECDSA, depending on the provider it might lead to an insecure option, such as SHA1withECDSA.

Bringing all this together, let’s start looking at how to implement the above steps using both Edward Curves and NIST standardized curves:

Congratulations! The hardest part of implementing a digital signature scheme is behind us.

Once you have asymmetric keys generated and Signature object initialized, it is time to sign the message. This part is the same irrespective of the curve you choose.

HowTo: Decide Where to Use it (Applications)?

Public Key Cryptography is a vast, complicated section of Cryptography. This post hopefully gives you adequate knowledge to get you started using Digital Signature applications. Hang in there for some more Crypto!

You can experiment with generating and verifying signatures by invoking corresponding endpoints from Java Crypto MicroService.

3. NIST 186-4: Section 3 talks about steps for digital signature generation and

12. How does Elliptic Curve Cryptography Work?

Previous Next
By Mansi Sheth