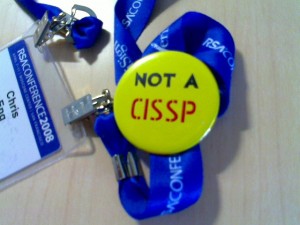 One of my favorite pieces of swag from RSA was this "Not a CISSP" button that was pinned onto me by none other than Sinan Eren as I was chatting with Justine Aitel at the Immunity booth. Actually, there should have been a prize awarded just for finding the Immunity booth -- they were subletting another vendor's space for a few hours at a time, so one minute they'd be there and the next they were gone. I digress. What inevitably happened once I started walking around with this button proudly displayed was that I would get one of two reactions. The first group -- mostly current and former co-workers and acquaintances -- understood the humor and got a good chuckle out of it. The second group would ponder for a bit and then ask, with some confusion, why I'd intentionally point out the fact that I'm not a CISSP. I'd give a brief answer and get back to talking about Veracode (we booth babes have responsibilities, you know). So, why indeed? The long answer is that like many security certifications, it's an ineffective measure of a security professional's practical abilities. Employers and customers often assume the guy with the five magic letters on his resume is technically superior to the guy without. In my experience, it's exactly the opposite, particularly in situations where you have to sit down at a keyboard and actually DO something as opposed to talking about it. Certainly, I've encountered some very notable exceptions to this observation, but we're playing by the 80/20 rule here. There's a good reason for this. The trend in information security is toward specialization. Security has become such a broad umbrella of varying disciplines that it's quite difficult to be a generalist. A security career is a balance between breadth and depth, and these days, the skilled pen tester, reverse engineer, or vulnerability researcher is more marketable than the guy who knows a little bit about dozens of different disciplines but can't apply that knowledge in a practical situation. The CISSP subject matter illustrates this perfectly -- you have cryptographic algorithms, site location principles, network security, and civil law on the same exam. I won't even get into the complaints I've heard about the poorly-worded, overly simplistic exam questions or the ones that simply test one's ability to memorize obscure facts. I'm not claiming that there's no value to holding the CISSP certification. It can't hurt to have some exposure to business continuity planning, for example. The problem, as I stated in the beginning, is that the CISSP title is often interpreted as an indicator of practical abilities rather than a book-level understanding of security basics. These misaligned expectations can ultimately lead to bad hiring or staffing decisions. 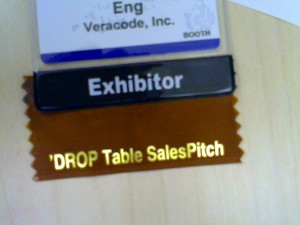 Career advice, take it or leave it: If an employer or prospective employer demands that you get your CISSP in order to be hired or to progress in your career, run fast in the opposite direction and find a place where you will be valued for your cumulative experience rather than a piece of paper. Learn by doing, don't "learn the test," so to speak. And that, in a nutshell, is why I love my "Not a CISSP" button. By the way, here was my other favorite from RSA, thanks to WhiteHat. This one and "Samy is my hero" were the best out of a pretty clever selection... even though they forgot the semicolon after the single quote. <grin>

Previous Next
By Chris Eng