This is the seventh entry in this blog series on using Java Cryptography securely. Starting from the basics we began diving deeper into various basic cryptographic primitives such as Cryptographically Secure Random Number Generator, symmetric & asymmetric encryption/decryption & hashes. After taking a brief interval, we caught-up with cryptographic updates in the latest Java version.

At this point, we are well equipped to discuss some of the most commonly encountered cryptographic schemes. Let’s start by looking at applications designed around symmetric cryptography, starting with Message Authentication Code in this post. Thankfully, Java provides us with rich, easy-to-use APIs for lot of these applications, relieving us to build up crypto systems from primitives.

Overview: What is MAC?

Encryption provides us with the confidentiality service of cryptography. In a lot of applications (think of any kind of secure communication), receiving parties need to be assured of the origin of the message (authenticity) and make sure the message is received untampered (integrity).

MAC can be constructed using ciphers (such as CMAC & GMAC) or hashes (HMAC). However, it is a bit tricky to get cipher-based MACs right. JDK doesn’t provide any cipher-based MAC constructions too. Rule of thumb: stay away from cipher-based MAC, even if encountered in some 3rd party providers. We already have a more trouble-free option with HMAC, so why risk it? Going ahead, we will just be focusing on HMACs.

HowTo: How Does it Work? 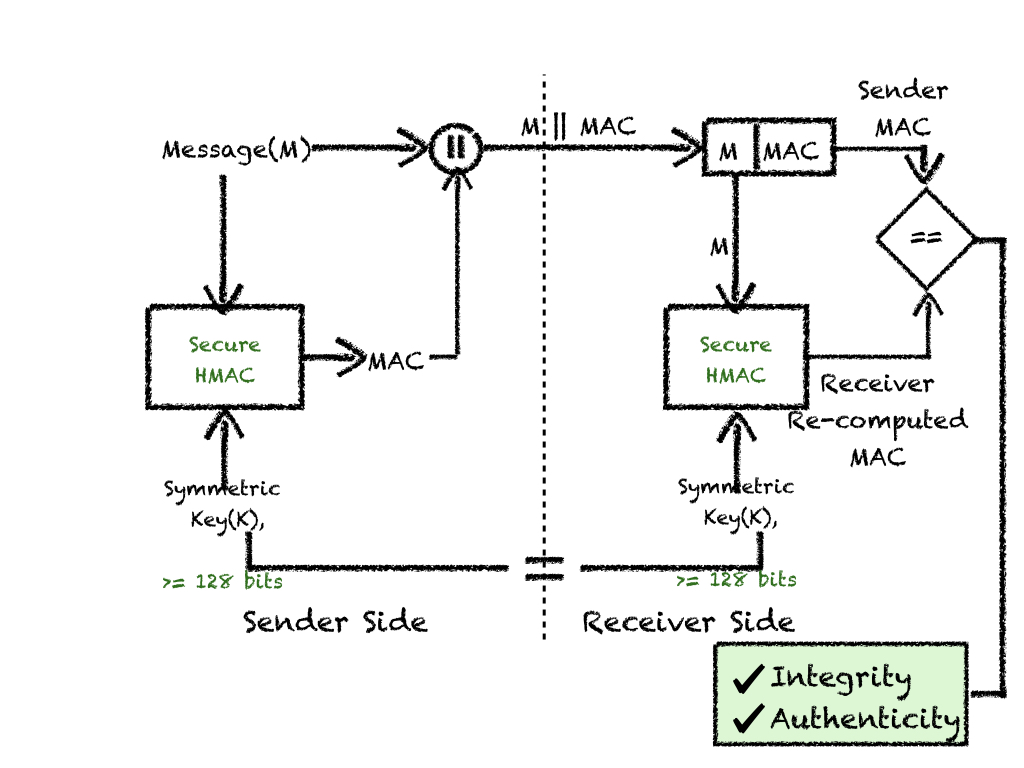 We would mainly need to make two secure decisions:

HowTo: Which HMAC Algorithm to Use?

It should be clear, HMAC computing algorithm is central in this MAC construction. JCA does provide a few of the not-so-safe HMACs for backward compatibility. Stay away from those. The list of secure JCA provided HMAC algorithms are:

Note: Collision resistance weakness of the underlying hash doesn’t impact the security strength of an HMAC scheme. Having said that MD5 is already out of the door[7] by most protocols and standards, but also SHA1 is severely discouraged due to its lower output size and various other reasons.

Use only the SHA2 or SHA 3 family of underlying hash for your HMAC algorithm.

Your MAC scheme is as secure as your key. Make sure:

A computed Symmetric key should be safeguarded as any other cryptographic keying material, i.e., it should be accessed only by involved parties.

Putting this all together, let's look at pseudo-code:

If received MAC, and re-computed MAC are identical on the receiver side, M is received untampered from the expected sender (party with symmetric key(K)).

Note: Peeping into the upcoming Java 16 release notes, there are no new additions apart from some backend sun provider support, which should not impact any of these discussions.

Refer to MACComputationAPI for a complete code example.

HowTo: Where is it Used (Applications)?

MACs are crucial in most secure communication protocols, such as tls, ssh, etc. Just focusing on modern applications, which most developers would encounter at some point, would be for authorization mechanisms. MACs are very commonly used for authorization purposes in terms of API Keys, JWT (Json Web Tokens)[3][4] & session IDs. Taking the example of JWT and seeing how it fits; Server signs a json payload with one of the signing algorithms, HMAC-SHA256 being one of them. This signature is attached to the encoded payload and passed to the client. The client in turn includes this exclusive payload (authenticity) and signature in each request thereafter talking to the server. The server verifies this signature to establish integrity.

You can experiment with sender and receiver endpoints of a MAC by invoking corresponding endpoints from Java Crypto MicroService.

This concludes our relevant discussion on using Message Authentication Codes. We will continue talking about a few more cryptographic applications and constructions in future posts. Stay tuned!

7. RFC 6151: Security Considerations for the MD5 Message-Digest and the HMAC-MD5 Algorithms