We’re excited to announce a new free trial option of Veracode Security Labs that allows new users to try the full Enterprise Edition for 14 days. Why is this hands-on training solution so critical? Developers are the backbone of the software that powers our world today, but when they lack security skills, it’s harder for them to keep up with the rapid pace of modern software development while still producing secure code. Veracode Security Labs helps close these skill gaps by giving developers that inimitable hands-on experience, and now with this two-week trial, you’ll have plenty of time to try out these hands-on-keyboard labs with your developers and see just how effective it is in real-time.

“Veracode Security Labs engages and actively teaches developers by giving them a containerized space to work with real code and demonstrates how to avoid flaws that have led to some of the headline-making vulnerabilities of the last few years,” says Ian McLeod, Chief Product Officer at Veracode. “With this approach, in as little as five to 10 minutes, developers can learn new skills and deliver secure code on time.”

Developer training with tools like Security Labs is critical as vulnerabilities in code are easily weaponized—and they’re not going away anytime soon. Verizon’s 2021 Data Breach Investigations Report (DBIR) showed that web applications make up 39 percent of all breaches today. And with the recent cybersecurity executive order from the United States government, it’s more important than ever that organizations pay attention to the security of their code.

Data from a survey by the Enterprise Strategy Group (ESG) shows that a sizeable 53 percent of organizations provide security training to their developers less than once a year. With the responsibility falling on the shoulders of software engineers to keep up with the latest threats and secure coding skills on their own time, Veracode Security Labs can help check those critical training boxes.

Training for teams large and small

Veracode Security labs Enterprise Edition is great for engineering teams that need hundreds of short labs on a wider range of topics, with included features like a leaderboard and reporting. The Veracode Security Labs Community Edition is a complimentary version with select topics for individual developers who want to start learning on their own. 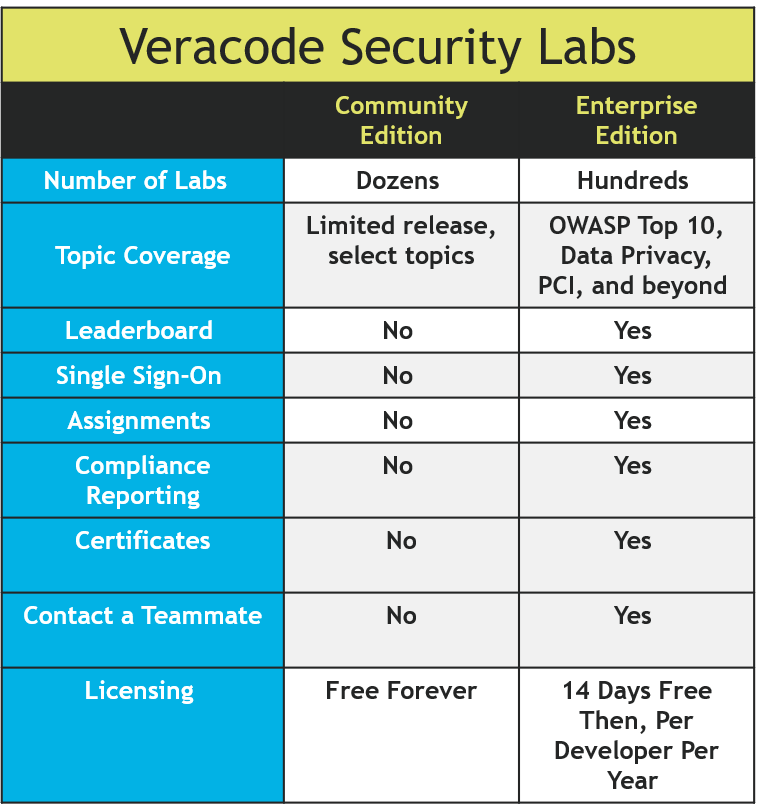 The most inexpensive bug to fix is the one that never gets created.  Veracode Security Labs helps developers shift critical security knowledge “left,” or sooner in the software development lifecycle (SDLC) so that their code is checked early and often. In doing so, they’re able to leverage those critical nuggets of security knowledge into each step of the development process. Over time, the code developers produce is more secure with fewer flaws and potential exploits, with DevSecOps principles sticking with developers from project to project. That means your team can:

If you’re ready to get started, sign up for your free two-week trial of Veracode Security Labs here.

Previous Next
By Jason Lane

Jason is Veracode's Principal Product Marketing Manager for SAST, Security Labs, and eLearning. He's spent 20+ years working in product management, marketing, and IT roles along with a long stint working with developers and startup companies. Now, he’s helping Veracode to drive awareness and adoption of secure coding and DevSecOps best practices within the developer community.