1. Coverage, both within applications you build and within your entire application portfolio

One of the primary benefits of binary static analysis is that it allows you to inspect all the code in your application. Mobile apps especially have binary components, but web apps, legacy back office and desktop apps do too. You don’t want to only analyze the code you compile from source but also the code you link in from components. Binary analysis lets vendors feel comfortable about getting an independent code level analysis of the code you are purchasing through procurement. This enables you to do code level security testing of the COTS applications in your organization's portfolio. Binary analysis lets you cover all of the code running in your organization.

If you integrate binary static analysis into your CI you can build in 100% automation with no need for manual human (developer) steps. The build process can run the binary analysis by calling an API and results can be automatically brought into a defect ticketing system also through an API. Code analysis is now transparent and inescapable. Developers will then see security defects in their normal defect queue. Developers will be fixing security flaws without needing to perform any configuration or testing saving valuable developer time.

Binary static analysis analyzes your code along with all the other components of the application, within the context of the platform it was built for. Binary static analysis can view tainted source data flow through the complete data flow to a risky sink function. Partial application analysis of pieces of a program miss this context and be will less accurate on both false positives and false negatives. Any security expert will tell you context is extremely important. A section of code can be rendered insecure or secure by the code it is called from or the code it calls into. With a complete program you can perform Software Composition Analysis (SCA) to identify components that have known vulnerabilities in them. A9-Using Components with Known Vulnerabilities is one of the OWASP Top 10 Risks so you want to make sure you can analyze the entire program. Veracode has built SCA into the binary static analysis process. 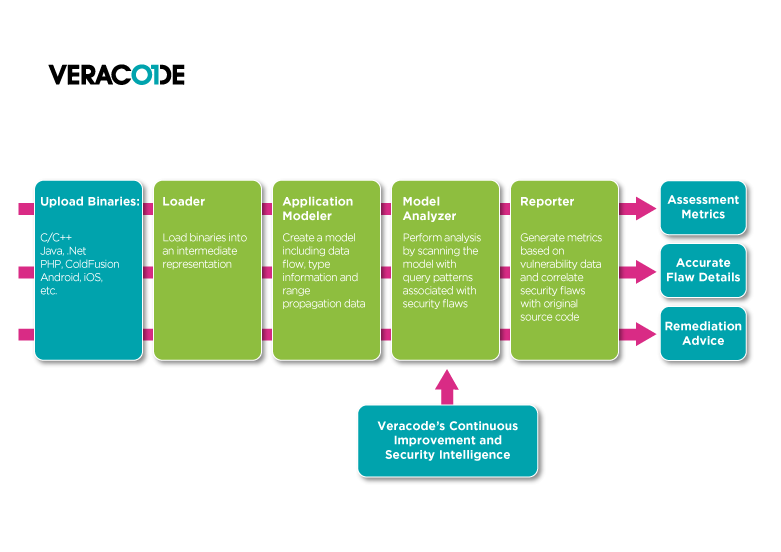 Some languages like C and C++ give latitude to the compiler to generate different machine code. Source code analysis is blind to decisions made by the compiler. There are documented cases of both the GCC and the Microsoft C/C++ compiler removing security checks and the clearing of memory which opened up security holes. MITRE CWE has categorized this vulnerability: CWE-14: Compiler Removal of Code to Clear Buffers. The paper WYSINWYX: What You See Is Not What You Execute by Gogul Balakrishnan describes how “there can be a mismatch between what a programmer intends and what is actually executed on the processor.”

Previous Next
By Chris Wysopal